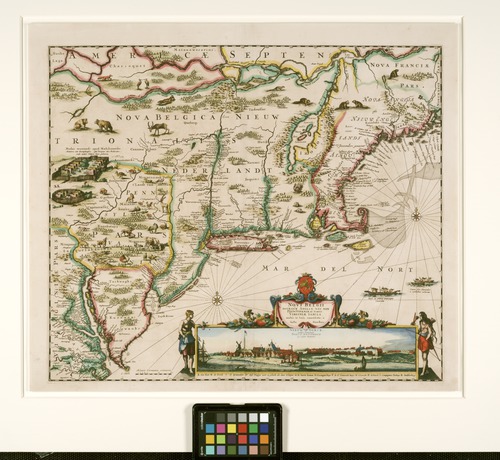 Title
Novi Belgii
Contributor
Danckerts, Justus, 1635-1701 (Cartographer)
Publisher
Amsterdam
Date created
[ca. 1690]
Type of resource
Cartographic
Still image
Genre
Maps (documents)
Historical maps
Format
Map/Globe, Image
Digital origin
reformatted digital
Abstract/Description
This masterful and beautiful map, based on one publisher by Claus Janszoon Visscher in the mid-1650s, was a seminal moment in the cartography of New England and New York. With its inset view of New York it showed educated Europeans what New Amsterdam looked like and also provided them with a remarkably precise idea of its geographic context. Based probably on a prototype by Augustine Hermann, the map was first published by Jan Jansson in 1650, without the view. Visscher brought out his own version around 1654, which included the famous inset view of the town. Taken from Governor's Island, southeast of Manhattan, the view is a somewhat idealized but generally accurate look at New Amsterdam just 25 years or so after its initial settlement. Information about the time when various buildings were erected suggests a probable date for the inset view between autumn 1652 and summer 1653.
This immensely popular map was reprinted in various versions by several of Visscher's competitors, and its geography remained basically unaltered for almost fifty years. One reason for the map's long publication life was simply its high quality. Its cartography was so exact that one historian observed that most areas of Europe were not better mapped at the time. This was the first printed map to delineate the shape of Manhattan correctly, and represented the summation of all the surveys of New Netherlands conducted by Dutch colonists since their arrival. It is believed to include every place-name in use in 1650 in the Northeast. Evidence of the high regard for the map in its day is that in 1685 an example of it was used by William Penn to settle the boundary between Pennsylvania and Maryland.
Danckerts first published his own version of the Visscher map circa 1673, though this strikingly colored example dates from slightly later, as it is one of the earliest maps to show Philadelphia, was founded in 1683.
Notes
The Abstract/Description provided for this map is taken from an accompanying gallery schedule.
Related item
Early American and European Maps
Subjects and keywords
Early American Maps
New Amsterdam
New Netherland
New England
New York (State)
Manhattan (New York, N.Y.)
Massachusetts
Pennsylvania
Maryland
Virginia
Identifier
american_danckerts_001
Permanent URL
http://hdl.handle.net/2047/d20129084
Location
Northeastern University Library
Use and reproduction
No Copyright. The organization that has made the Item available believes that the Item is in the Public Domain under the laws of the United States, but a determination was not made as to its copyright status under the copyright laws of other countries. The Item may not be in the Public Domain under the laws of other countries. Please refer to the organization that has made the Item available for more information. https://rightsstatements.org/page/NoC-US/1.0/