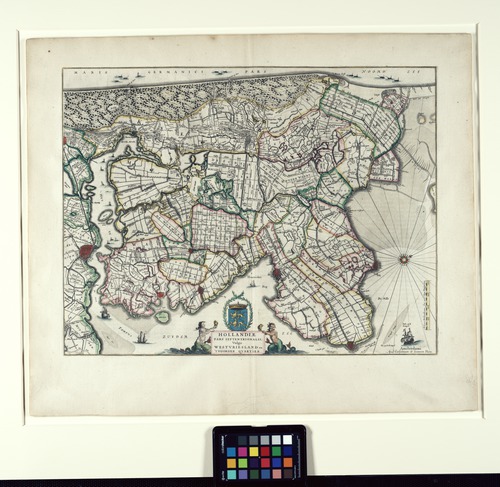 Title
Hollandiæ Pars Septentrionalis Vulgo Westvriesland en 'TNoorder Quartier
Contributor
Blaeu, Joan, 1596-1673 (Cartographer, Engraver)
Publisher
Amsterdam : Joan Blaeu
Date created
[ca. 1662]
Type of resource
Cartographic
Still image
Genre
Maps (documents)
Historical maps
Engravings (prints)
Format
Map/Globe, Image
Digital origin
reformatted digital
Abstract/Description
Prominent Dutch cartographer and publisher Joan Blaeu portrayed hundreds of locations across the globe. From his studio just outside of Amsterdam, Blaeu published religious and philosophical texts, as well as atlases and maps of all sizes. As representative to the Dutch East India Company, Blaeu had access to thousands of maps and accounts of recent explorations, which he used as the basis for his own work. Blaeu's magnum opus, Atlas Major, contained 594 maps and more than 4,000 pages upon its initial publication in 1662. Depicting regions from Europe, Asia, and the Americas, Atlas Major was produced in several languages, including Dutch (9 volumes), Spanish (10 volumes), Latin (11 volumes), and French (12 volumes). After printing, Blaeu often sent the atlas to leading local craftsmen for finishing touches. Artist Dirk Janszoon van Santen typically provided watercolor and gilding to the black and white prints, and book binder Albertus Magnus bound many of the volumes. Atlas Major, from which many of the prints in this collection derive, quickly became the comprehensive standard for atlases.
Related item
Atlas Major
17th Century Dutch Atlas Maps
Subjects and keywords
Netherlands
North Holland (Netherlands)
Westfriesland (Netherlands)
IJssel Lake (Netherlands)
Identifier
dutch_blaeu_008
Permanent URL
http://hdl.handle.net/2047/d20129150
Location
Northeastern University Library
Use and reproduction
No Copyright. The organization that has made the Item available believes that the Item is in the Public Domain under the laws of the United States, but a determination was not made as to its copyright status under the copyright laws of other countries. The Item may not be in the Public Domain under the laws of other countries. Please refer to the organization that has made the Item available for more information. https://rightsstatements.org/page/NoC-US/1.0/